Interview with Antonio García Marcos in the ABC

The ABC newspaper interviews Teldat’s president, Antonio García Marcos, where he explains, among other things, the firm’s significant investment in Germany

The ABC newspaper has published an interview with Teldat’s president, Antonio García Marcos. The company, created in Spain in 1985, has managed to maintain orderly growth and react appropriately to difficult times in the market. With the “dot-com crisis, we had to downsize the company; whereas in 2010, it was the other way round and we were able to make some important investments”. Highlighting the purchase of the German company, Antonio García Marcos explains that this investment “has been a good blend of our flexibility and German rigor”.

Our president now plans to bring the technology to the market, “to be intermediaries who put their technology into services or sales because that is an area where I see future growth”. He also expects “sustained growth of 15%”, although he doesn’t rule out the possibility of “another quantum leap”.

Antonio García Marcos talks about SD-WAN as “a new paradigm that cheapens solutions”, with a “faster and more equal” network and “intelligence located in the cloud”.

In 2017, Teldat’s turnover increased by 20% to 66.7 million euros. The company caters to a global market of more than 40 countries, although the majority of its sales relate to Central Europe, Spain, Mexico, Peru and the USA. Teldat’s president also points out that between “15% and 20% of our revenues go to R&D”. 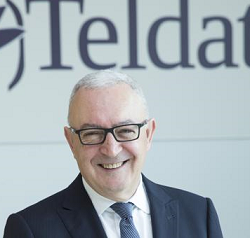