Teldat has been incorporated into the CRE100DO country-program, an initiative launched by the Bankinter Innovation Foundation, ICEX and the Círculo de Empresarios to boost the Spanish middle market.

Teldat is one of 26 companies to join the CRE100DO initiative that aims to help companies to become bigger in order to boost the economy and business fabric in Spain. CRE100DO has thus reached its goal of bringing together 100 middle market companies to serve as a reference to help other companies looking to grow in this market segment.

For Antonio García Marcos, president of Teldat, “being part of CRE100DO represents recognition of a trajectory of more than three decades in which we have grown to company size and become an international company. It gives us great satisfaction, in this sense, to be among the examples to follow. We want to contribute to the purpose of the CRE100DO program, that of helping our companies to grow and cross borders. We are facing a fantastic initiative, a country-program that will promote greater economic development and see a return to wealth and well-being for all”, concludes the president and founder of the company.

The CRE100DO member companies post a combined turnover of over €12 billion, which represents more than 1% of Spanish GDP, and employ more than 60,000 workers. During 2017, the CRE100DO companies as a whole recorded a turnover growth of 10.4%. Moreover, 100% of the companies participating in the country program are international companies. 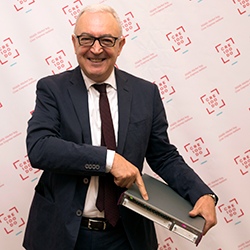