The first engineer to receive such a title from Alcala University, emphasizing his clear vision as leader of his company, adapting to changes in a sector as demanding as Telecommunications

The President of Teldat, Antonio García Marcos, was invested with the title of Doctor Honoris Causa by Alcala University (UAH) at a ceremony held in the university’s main hall, presided over by Rector José Vicente Saz.

The award, proposed by Alcala University’s (UAH) Higher Polytechnic School (EPS), commends García Marcos both for his clear vision as leader of his company of how to adapt to changes in a sector as demanding as Telecommunications and for his courage and constant commitment during risky times, which have made Teldat a leader in its field. The appointment also underscores the importance of Teldat’s long-standing relationship with the University.

José Antonio Portilla (Professor of Signal Theory and Communications and Director of the EPS), making the tribute speech about García Marcos said “his professional, business, academic and research merits, both inside and outside the University, are only one aspect of his character, which you can also find in the many comments made about the kind of person he is. These are really the result of certain personal characteristics which are immediately obvious when you have the chance to spend time with him and that can be summed up with words like courage, loyalty, team, work and inspiration”.

For his part, Antonio García Marcos made a speech in which he  ran through some of the most important advances in telecommunications: from Thales’ observation of electromagnetic phenomena in the fifth century B.C., through the 19th century invention of the telephone, up to today’s possibilities with the Internet of Things, with mobile connectivity expected to grow as a result of 5G networks, and with the number of connected devices projected to reach over 50 billion by 2025. The new Doctor Honoris Causa emphasized his “reverential respect and love towards the University Institution”. Indeed, he titled his speech “The Alma Mater Societies University”, saying “the University is like a tree that roots, grows and feeds on knowledge. Flowers sprout from this tree, with some of them going on to produce fruits in the scientific, literary, philosophical and engineering fields”. He ended his speech by linking the institution to the business world, stating “sometimes these flowers obtain fruits in the form of companies. These companies are the vehicles par excellence through which the result of this knowledge is transferred into practice, ultimately, helping society develop”.

Antonio García Marcos’ investiture can be seen on this recording…

Antonio García Marcos (Salamanca, 1953) is a Telecommunications Engineer and founder of Teldat – the first European company to design access equipment for corporate networks. Among other awards he has received throughout his career, he was given the “Engineer of the Year 2000” award from the Governing Body and Executive Board of the Official College of the Spanish Association of Telecommunications Engineers. This award was in recognition of his professional career in creating and developing his company – one of the sector’s most prominent companies in data and image transmission.

Since its founding, Teldat has constantly worked with different universities, conducting basic research on technologies which have later been implemented in the devices Teldat offers to market.

García Marcos becomes the first Telecommunications engineer to receive the award of Doctor Honoris Causa from the UAH. 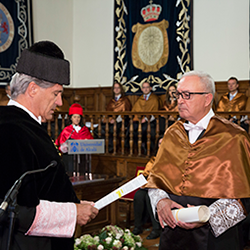