COIT and AEIT announce Ignacio Villaseca, General Manager and member of the Teldat Board of Directors, as the recipient of the 2019 Engineer of the year award

COIT and AEIT, through this award, recognize Ignacio’s key contribution to the Spanish telecommunications sector. After finishing a Telecommunications Engineering degree in 1981 at UPM and an MBA in 1990 at IESE, Ignacio’s professional career began in ITT/Standard Eléctrica’s R&D division, and from there he went to work for Seinvesa as Product Manager and later Technical Manager between 1982 and 1986. He then joined Harris Ibérica as Marketing Director, between 1986 and 1989, and after that was appointed Engineering and Support Manager of Nokia Data España (from 1989 to 1992).

Villaseca is also a member of IMDEA Networks’ Board of Trustees and throughout his career has served as board member of various companies in which the Teldat Group has participated.

In the words of Marta Balenciaga, Dean-President of COIT and President of AEIT, “Ignacio has been capable of guiding Teldat, during 25 years of frantic technological change, and making it a Spanish company of reference on both a national and international level.  Today, Teldat is undoubtedly Europe’s  leading European company in SD-WAN development and designing corporate network access devices. And we cannot forget that Teldat’s president, Antonio García Marcos, was also presented with this award in 2000”.

The event was also a time to recognize associates who have been 50 years in the business and remember those telecommunications engineers who left us in 2019. 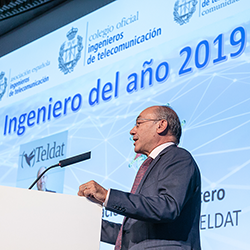