The autonomous vehicle and smart cities 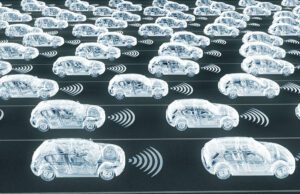 Like many things in our lives, and as a result of the technological revolution, cities are subject to a constant transformation as they respond to the needs of the citizens who live in them and maintain or increase their sustainability. With the emergence of the IoT (Internet of Things), cities will undergo huge transformations aimed at both solving the problems which, in many cases, are already besetting them – as is the case of pollution – and providing people with more and better services.

Autonomous Vehicles: the next step in digital transformation

Much of the IoT’s success is due to the soon-to-come rise of 5G networks, whose features (e.g., low latency or response times and high connection speeds of up to 1 Gbps) make them especially suited for meeting the needs of what are called Smart Cities.

One area where we expect to see a greater transformation towards the world of digitalization and monitoring in the network, in contrast to the traditional model that everyone knows today, is that of driving. Vehicles are not only going electric, a reality that is ever more apparent in our streets each day, but they are getting increasingly smarter: autonomous and collaborative driving, preventative fault detection and smart traffic management are some of the features we can expect to see soon. It is even predicted that we will switch to a new use model as far as cars are concerned, already present in car sharing and car renting platforms, but which goes much further, making the vehicles fully self-managing – attending to the requests from users asking to use the service, picking them up and taking them to where they want to go in a fully autonomous and independent way.

The vehicles of the future are nearly here

The amount of Information that an autonomous car must process per time unit is extraordinarily high, and gradually increases as the complexity of the navigation system that governs it increases. For example, a LIDAR sensor, which projects light pulses to produce three-dimensional images of the environment, performs up to 1.5 million readings per second. Cameras are also used, both in the visible and infrared/ultraviolet range, and use computer vision techniques (e.g., proximity sensors, monitoring probes that show vehicle status, etc.) to identify the elements they observe. And just as important as the environment sensing process is data processing and handling, and the decision making that comes out of this, while taking account of traffic regulations and basic ethical standards such as accident prevention and passenger/pedestrian safety. In fact, here we come across one of the most pressing problems, which is also the one that gives rise to the most debate around autonomous driving – that of deciding which person or group of people the vehicle should protect or safeguard during fatal situations (for example, a car full of passengers that’s about to hit a group of people).

Several options are being thrown around to minimize the risk of road accidents. One that is rapidly gaining ground is to bring vehicles to market that not only steer themselves, but also interact with each other. This offers interesting possibilities including, among others, collaborative accident prevention, the possibility of reducing congestion at crossings and on highways by automatically adjusting vehicle speed, and helping police cars and ambulances to quickly get where they need to when emergencies happen.

It’s a fact that the options for improvement are incredible. However, for it all to be feasible, we need an infrastructure that is capable of appropriately and, equally important, safely handling such large amounts of information.

Although autonomous vehicles use the latest in sensor technology and real-time processing systems, decision making based on environment data could not be possible without communication and interoperability between different vehicles and external elements like sensors placed in urban areas.

Therefore, there should be large computing and data processing centers working continuously in the cloud receiving this information and providing appropriate responses to every situation. A system that interconnects vehicles and other urban elements in order to exchange information would be extremely dangerous if the data are not handled properly. So, it is essential to put in place secure, reliable communications networks that can respond quickly and, at the same time, be impervious to such threats.

To keep the telecommunications networks that would make these cities of the future a reality performing optimally, the emergence of 5G technology is decisive, as is a change of model towards distributed networks that can be remotely managed or easily modified and tailored to the circumstances in each environment.

Teldat is continually searching for and developing systems that can provide robust, flexible solutions to this and other challenges for the cities of the future, opting for SD-WAN architecture as a key part of its market solutions.

Electronic Engineer in the Teldat R&D Department. He is currently working as a programmer engineer in the embedded software and operating systems area