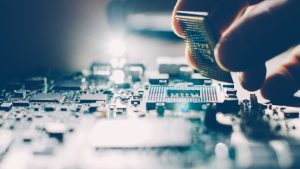 This year’s University Entrance Exam (EVAU) for physics in Madrid included a question on atomic decay.

The difficulty could lie not so much in physical concepts as in statistics, and with an equation as simple and seemingly innocent as the exponential:

This equation also contains a wealth of information and models phenomena that sometimes lack intuitiveness.

The exponential function represents the probability of random events that have no memory, i.e., that are not more likely to occur when they haven’t happened for a long time. If we know that a bus comes by every ten minutes and we have been waiting at the bus shelter for nine minutes, its arrival is much more likely than if we had only just arrived at the bus stop. Conversely, although a dice on average will roll a six one out of six times, it is not because we have not rolled it five times that we are more likely to roll it the next time. Rather it is because we are as we were at the beginning. The bus, however, does have a memory and we are not as we were at the beginning.

Electronic devices – and the components they are built from – have been seen to suffer random failures that are not related to material aging (i.e., they have no memory) but follow an exponential probability density function: 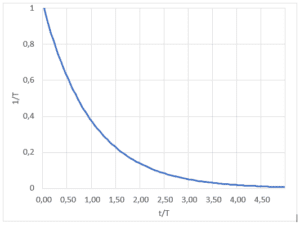 The density function’s integral represents the probability that an event has occurred up to a certain time ‘t’. This is called the distribution function: 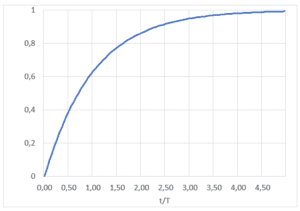 Manufacturers characterize this phenomenon with the MTBF (mean time between failure) parameter – whose value we would use in place of ‘T’ in the above equation. They subject thousands of parts to aging tests and find that on average they fail in that time. However, the probability of a component failing when it reaches its mean lifetime is not, as one might expect, 50 percent. If we replace ‘t’ with ‘T’ in the above equation, we find that the cumulative probability up to that time is:

It’s not uncommon for an electronic device to have an MTBF of 0.5 million hours. That’s 57 years, which could lead us to think that maybe the equipment doesn’t need to be that reliable if it will  be obsolete much sooner. But MTBF is not the useful life. Therefore, a high MTBF is always preferable as it implies that, out of every 57 devices installed, one will fail on average per year from day one. So, if we need said device to work for ten years, it is better to have at least ten spare units in stock.

A radioactive isotope behaves statistically the same as an electronic device. The EVAU entrance exam included a question on Polonium-201, with a 138.38-day half-life. This means that an initial quantity of this element is reduced by half each time said period elapses, in proportion to the factor:

But what is the MTBF equivalent of a Polonium-210 atom? How long does it take for an atom to break down on average when you observe many of them? In physics, this is called the “mean lifetime” and is easily calculated from the half-life:

If you had doubts about whether your high school physics studies could be of any use, here you have seen that an understanding of nature and its mathematical modeling can have unexpected applications.

At Teldat, we calculate the MTBF of our telecommunications devices based on the parameters of the electronic components they are made up of. Having reliable hardware is just as important as knowing the value of that reliability to be able to estimate repairs and service availability accurately.

Ricardo Saiz, telecommunications engineer, is part of Teldat’s R&D department. He specializes in hardware, and is responsible for electronic design and equipment certification.