The Internet lands in bank offices 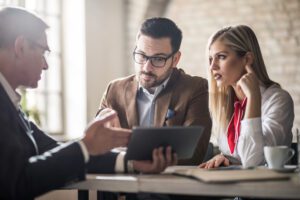 Banking was one of the first sectors in need of telematically connecting its offices and cash machines with Central Services. The arrival of the first point-to-point lines made it possible. Thus, movements made in customer accounts were updated in real time in central computers. While today we take this for granted, it was a revolution at the time.

During this first X.25-led era, the Internet was little more than a laboratory toy hidden in universities. However, the toy eventually jumped into homes through expensive and slow telephone line modems. The general public already wanted access to the Internet to be able to visit the Web pages that were starting to become popular back then. Remember the data flat rate struggle – the maximum aspiration of any good Internet user at the end of the 90s. What times those were!

Corporate telecommunications networks continued to evolve on the back of residential services, passing through successive generations such as Frame Relay and ATM. It was in this context that a disruptive change occurred allowing large bandwidths to be taken into the home: ADSL.

The arrival of ADSL technology caused an immediate distortion in the market. For the first time, the bandwidths offered to homes were greater than those available in company offices. As if that were not enough, the costs were much lower… And this situation has remained to this day, with residential fiber optics being much cheaper than their business equivalent. How can this gap in costs and benefits be justified? Are companies paying more for less? This is the question we have to answer. Let’s see.

The public and best effort character of the Internet service, together with the potential security threats, initially kept the banks away from using it for corporative communications. However, the Internet’s ubiquity, provisioning speed and potential for cost savings encouraged the first use experiences. In 2002, one of the largest banks in Spain initiated the first deployment of cash machines connected to the Internet through ADSL. Security was ensured via IPSec encryption.

That first successful experience was followed by others that can be considered as true forerunners of the current SD-WAN technology. We are talking about hybrid networks where each office has dual infrastructure: MPLS business line and Internet line. The advantages of this architecture are obvious. First of all, it provides a real backup where even the operator’s network is redundant; hence, the office is protected even against possible general MPLS network failures. And a second advantage is that the backup is active-active, i.e., the Internet line can be used simultaneously, routing over it the traffic that’s better suited to its use due to being heavier or less critical.

The advent of the SD-WAN era

The difficulty of implanting hybrid networks is due to their greater complexity, and this fact must be considered an additional cost. This is where SD-WAN technology, or the software-defined WAN network, appears with the promise of simplifying to the maximum the operation of a network based on multiple Internet WAN lines. We can highlight the following factors in relation to the technology’s adoption:

• The topology of company networks has changed. Not only must offices communicate with Central Services. Many applications are now hosted in the public cloud and reached much more efficiently directly through the Internet. The same can be said about the use of SaaS (software as a service) platforms.

• The reliability of residential fiber optic is comparable with that of business. And if one residential line isn’t a good enough guarantee, there is nothing to prevent two or more being used, even from different operators.

• Provisioning speed and homogeneity. Internet line provisioning is much more agile and the communications scenario is homogeneous anywhere in the world, once the SD-WAN overlay is superimposed. This advantage is especially important for multinational corporations.

• Greater communications control. SD-WAN technology allows full visibility and control of the service level given to each application. In addition, SD-WAN network functionalities can be consumed through API-REST, which allows provisioning and exploitation of the network to be easily integrated with business processes.

• And, of course, cost savings. Yet, even this isn’t the most important factor. The need to provide offices with direct Internet access is no longer disputed: it depends on the change in the communication paradigm. Now the priority is about being ready to access the cloud efficiently.

Therefore, we believe that the Internet is in bank offices to stay. MPLS networks will continue to be around, especially in countries like Spain where they are providing very competitive levels of benefits and costs. However, in the coming months we will see more networks evolving towards the SD-WAN paradigm, while more applications go to the cloud and more software is consumed as a service. The Internet has definitely landed in bank offices.

At Teldat, we have been developing our SD-WAN solution for a number of years now. In particular we have dedicated resources and collaborated with banks to develop SD-WAN for their offices.