The Wi-Fi 6 technology set out in the 802.11ax High Efficiency (HE) standard is the natural successor of the wireless Wi-Fi 5 technology or 802.11ac standard, known as Very High Throughput (VHT).

This new implementation has been designed to work in high user density environments (for instance, a stadium, an airport, or branch offices with many Wi-Fi devices). Other characteristics are latency time reduction and the increase in download speed using the same amount of bandwidth. Signal coverage maintains the previous standards values. This is because increasing the signal strength does not ensure better network performance, especially in high density environments with many access points, since the greater the number of access points the greater the probability of interference between them. Therefore, to improve network coverage it is always better to maintain a number of access points that provide coverage in specific areas of the deployment.

One of the main SU-MIMO restrictions is linked to congestion problems (given access points process station requests in sequential order, meaning a greater number of stations translates into a longer waiting period to send or download data). The use of MU-MIMO is capable of parallelizing the stations so that there are no waiting times to open a flow up to a certain number of stations, set by the number of antennas deployed at the access point (2×2, 4×4, 2x2x2, 8×8). This characteristic improves VoIP traffic in stations that connect in parallel to the access point. 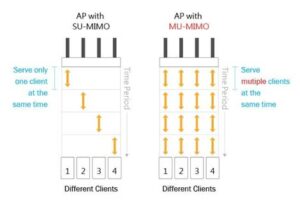 Example of data flow parallelization between different stations in an access point (AP) with MU-MIMO implementation.

Wi-Fi standards prior to 802.11ax use Orthogonal Frequency-Division Multiplexing OFDM. This standard is inefficient, since stations make use of all the bandwidth available to send or download data in due time. OFDMA divides the channel into different fragments known as resource units (RU). Each fragment or RU can be used by a client, depending on the need to parallelize data transmission and downloading within the channel’s bandwidth.

Difference between OFDM 802.11ac and OFDMA 802.11ax. Use of the fragmented channel that provides RUs to each station (depending on the needs).

This fragmentation prevents stations that send small data packets as text messages from using the medium excessively or inefficiently, thus allowing other users making videocalls or downloading multimedia files to make use of the channel. This way, the channel can be fully used with high data throughput levels. 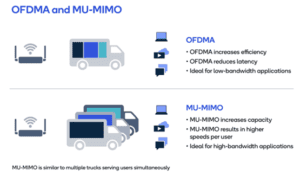 Joint use of MU-MIMO and OFDMA for high user density environments.

The joint use of OFDMA and MU-MIMO allows multiuser access and provides service in high user density environments.

One of the main problems in high density Wi-Fi network deployments is the overlapping of access points (or OBSS). It affects network performance by increasing latency periods due to the waiting time to transmit, since one or more access points are sharing the same channel (Co Channel Interference, CCI). 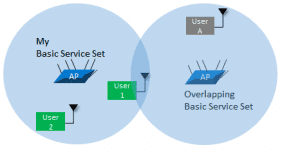 Both access points are transmitting in the same channel but, since they cannot see each other, the station cuts down the access time and minimizes the channel use. To prevent this and make sure the station is able to transmit (even if the medium is being used by the access point that does not belong to the same network or BSS), the access point and station use BSS Coloring Spatial Reuse.

Use of BSS Coloring between two access points with 802.11ax

The station (Client 2) can check the BSS coloring value in frames transmitted by both access points and calculate the signal value of the intra-BSS access point (that is, the access point or station frame outside inter-BSS within the working BSS). Once the signal value has been calculated and considering the power reduction that must occur to avoid interferences with external access points, the station can transmit simultaneously (increasing the efficiency of the overlapping channel). This functionality considerably increases the use of the 2.4GHz bandwidth, since this frequency only has three 20MHz non-overlapping channels in the electromagnetic spectrum used.

Another 802.11ax improvement is the use of more modulation than in previous Wi-Fi technologies. This way, the data rate increases using the same channel, meaning rates are much higher than in 802.11ac.QAM modulation works with two orthogonal carriers, which change in amplitude and phase (thus securing a bigger encryption in data transfer per symbol).

This increase in data transmission rates depends on the quality of the signal between transmitter and receiver (increasing the modulation value if the signal quality is greater). The 802.11ax standard is compatible with QAM-1024 modulations, unlike the 802.11ac standard (which only supports modulations up to QAM-256). Theoretically speaking, modulation increases in  802.11ax can withstand data transfers of up to 1.5 Gbps in 80 MHz and 3 Gbps in 160 MHz.

The use of the TWT feature allows devices to choose when to become silent and save energy during data transfers with the access point.

Therefore, TWT is a great energy-saving method for mobile and IoT devices that need to preserve the battery life.

Devices connected to an access point with TWT can remain on standby until the access point notifies its transmission time, at which point the devices wake up and transfer data.

The new generation of access points developed by Teldat are equipped with Wi-Fi 6 technology, meaning all features described in this blog post will be used in the Teldat 802.11ax devices to be released in the near future.

Telematics Engineer. He is part of Teldat's R&D Department. Within this department he is part of the new generation access points team