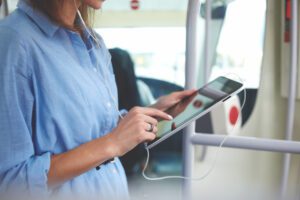 Fixed Wireless Access has huge opportunities and challenges for the Telecom Industry with the deployment of the 5G system, but why is so important?

Up to now, LTE is still considered the fastest developing mobile technology ever. Since its launch in early 2010, it has been successfully deployed worldwide to billions of users, both for mobility and for fixed use cases, and its growth is expected to continue as it evolves along with the 3GPP standards to include new functionalities and to improve the customer experience. With the latest LTE technology evolution, cellular devices are already enabled to go over the theoretical Gigabit data download speed, and satisfying the majority, if not all, of the Mobile Broadband use cases, like streaming video and audio, instantaneous ride-hailing applications or the explosion of social media. The new coming 5G paradigm is however bringing a dramatic generational shift that will change the way how, not just people, but also all “things” stay connected. Its revolutionary speeds, low latency, high resilience, are the game-changer for creating unprecedented opportunities for business innovation with tremendous impact on the whole Industry. Having said that, while the industry seems to run faster than ever through an immediate technology transition, the reality is that there is still a long way to go until 5G overtakes LTE on both the number of deployments and user subscriptions; the evidence is that LTE has only overtaken the previous generation of mobile technologies in Q1 of 2019.

However there is one exception where 5G may not take so long to overtake LTE. That is Fixed Wireless Access (FWA) technology which is considered the most compelling business case where both MNOs and CPE manufacturers can monetize their ROI and contribute to grow their consumer and enterprise businesses.

FWA indicates nothing more than a way, a method or a concept to leverage on the exiting mobile networks to provide Internet services to users that are situated in fixed location. This is a market that has been so far monopolized by wired connectivity (FTTx/xDSL) and where LTE modems, despite the increasing throughput speed that they offer, have been used in most of cases merely as backup solutions. With 5G, FWA can make a drastic change in the way Mobile Broadband is brought to premises, either for residential or enterprise use. Fiber will no longer be the only way to have high download data rate with extreme capacity as the wireless system can now provide a seamless connectivity but with a higher degree of flexibility, easier deployment, and foremost, at a more convenient cost by reducing both CAPEX and OPEX. According to certain consultants, CAPEX for FWA could be up to 50% cheaper than CAPEX for FFTx due to the big saving for those unnecessary engineering works for laying and cabling the last mile connectivity. In addition, CAPEX can be further reduced when existing MNOs share their base stations for both Mobile and FWA offering, therefore leveraging on the economies of scale and hence improving significantly their ROI.

Early MNOs adopters, predominantly in Europe and Asia, have initially started to deploy 5G in the C-Band around 3,5GHz, a frequency that has been freed and allocated with the initial goal to be used by LTE and that allows as much as 400MHz bandwidth. In the US there is a different scenario. Here, the CBRS band that lies between 3550 MHz to 3700 MHz, is unlicensed and used by both incumbent military applications and to build up Private LTE networks. Therefore, the major MNOs, have already been deploying, and taking advantage of, 5G in the mmWave spectrum. Having said this, trials around the 28GHz are also ongoing across the world and mmWave will be the major focus of all the MNOs in the second phase of the 5G deployment. 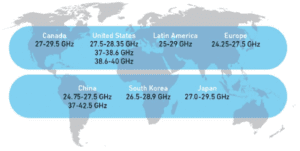 mmWave Spectrum Availability Across the World with Breakdown by Regions

To sum up, there are a lot of good economic reasons why FWA has emerged as one of the most predominant use cases for early 5G network rollouts, where the Telecom Industry is posing its attention as a new source of revenue stream. However, what is clear is that to date LTE technology is allowing companies to solve problems what cannot currently be dealt with by fixed lines. At Teldat, wireless technology has always been an important part of our business, for company sites, vehicles, trains and more.